The NSW Electricity Infrastructure Roadmap was legislated in late November 2020 and represents a significant change in electricity system for NSW. One of the key pillars of the Roadmap is the development of Renewable Energy Zones (REZ) – the creation of a specific area within the broader electricity network where there will be a focus on expediting investment in renewable energy generation like solar farms, wind and storage as well as the transmission and distribution network required to support that generation.

The Roadmap has identified five REZs across the State – in the Central-West Orana, New England, Hunter-Central Coast, Illawarra and South-West regions. With three REZs located in Essential Energy’s footprint, we are directly involved in the development of the detailed implementation requirements to ensure we maximise opportunities for the communities we serve.

The REZ’s expect to deliver around 12,000 MW of generation capacity by 2030– with the potential to power more than 5.5m homes and offset nearly 25mt of carbon dioxide. It could also spur a possible A$32billion of investment in generation, storage and transmission over the next 10 years.

Along with a multitude of other benefits, the Roadmap also aims to provide broad based stimulus and employment to regional communities which have been recovering from bushfires and drought. The Roadmap is also expected to reduce annual NSW electricity bills by around $130 for the average residential customer.

The first REZ to be implemented is in the Central West Orana. The REZ covers an area in which Essential Energy already has an extensive distribution network, parts of which has capacity to host smaller-scale renewable generators.

While the majority of large-scale generators connecting within the REZs will connect directly to TransGrid’s high-voltage network, many smaller renewable generators will seek connection directly to Essential Energy’s lower voltage distribution network. Essential Energy is working with the NSW government to ensure that surplus network capacity at the distribution level is also considered within the REZ development.

Another key link between Essential Energy and the REZ is the opportunity to leverage future increases in embedded generation (such as rooftop solar) and load on Essential Energy’s network. The Roadmap is designed to increase the penetration of renewable generation in NSW, to reduce emissions. The contribution of customer’s investment in renewable technology such as rooftop solar is also a key consideration in the Roadmap.

In addition, the NSW government has committed to the development of a Regional Energy Strategy which will be focused on how communities within the REZ benefit including identification of community energy projects, ways to improve reliability and encourage new industries and growth to the region. Essential Energy is working closely on this work with the Central West Orana region being the initial focus area. It is expected that community consultation will be undertaken to get insight into the types of projects that would add most benefit.

Find out more at energy.nsw.gov.au 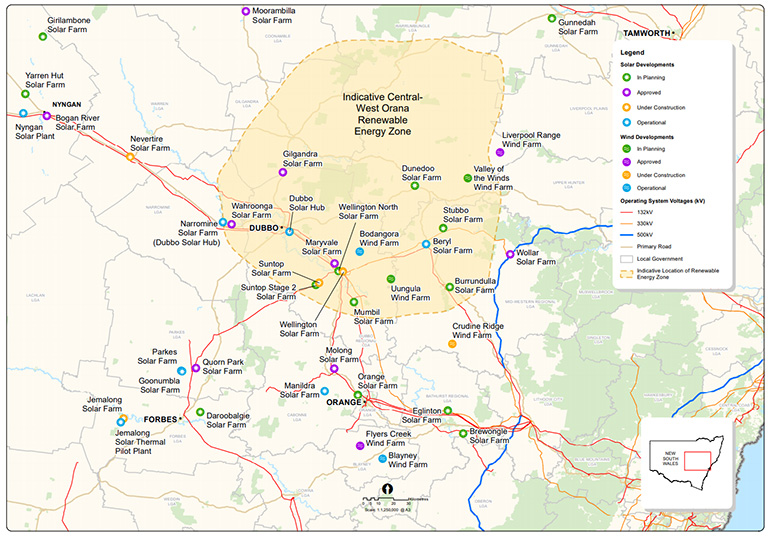